Help maintain the relaxed, family-friendly atmosphere of the Outer Banks by keeping our neighborhoods safe and enjoyable for locals and visitors alike.

A reminder that crime is preventable if you just take a moment.

Take a moment to check out Crime Line’s YouTube Channel. Why not subscribe so you you can stay on top of all the important information and announcements from Crime Line? 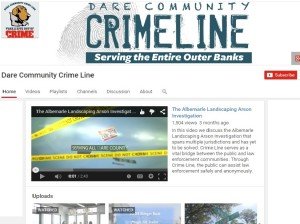 Tipsters may remain anonymous.  After providing information, check back periodically in the REWARDS section to see if your information has lead to an arrest.  Alternately, you can create a temporary email account for law enforcement to contact you to give you your reward.

Crime Line offers cash rewards up to $1000 rewards for information leading to the arrest of suspects and the recovery of stolen property.  ENHANCED REWARDS are offered on some cases through private and corporate donations. 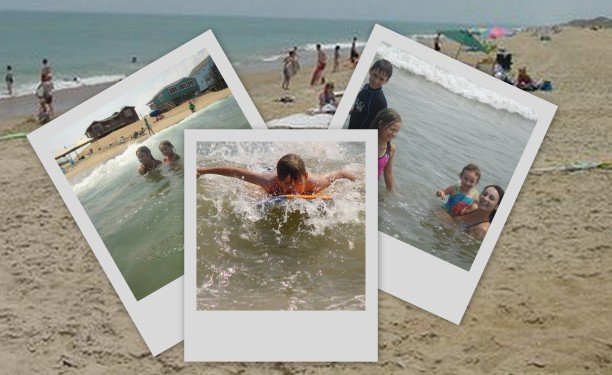 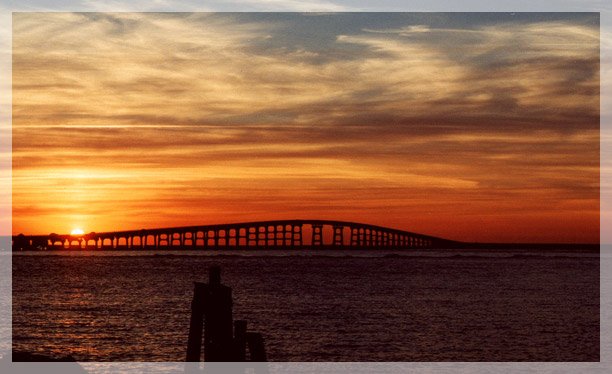 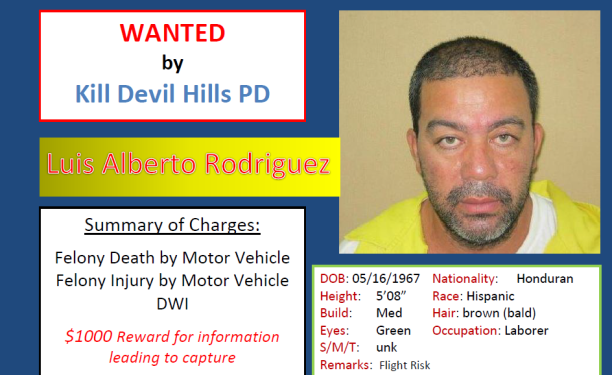 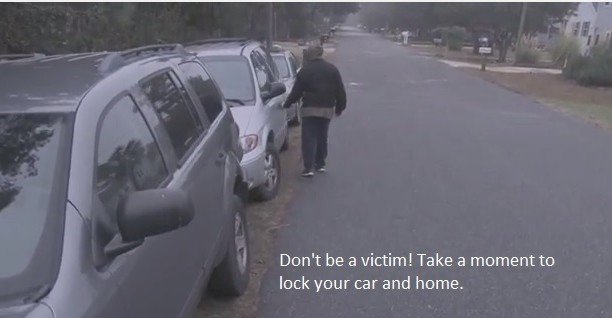 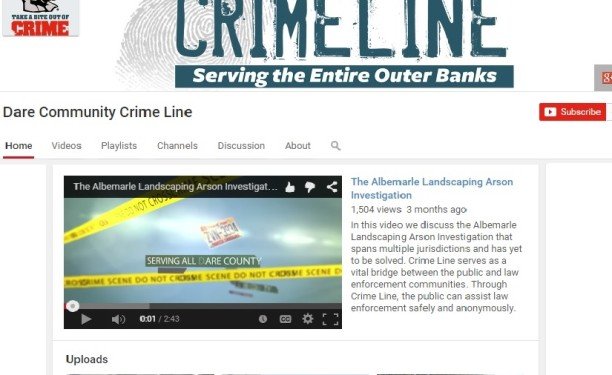 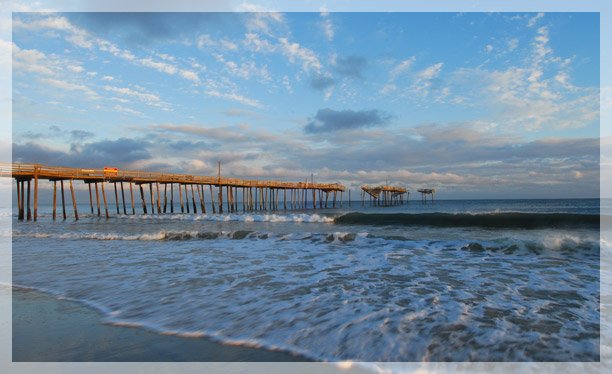 Dare Community Crime Line is a vital bridge between the Dare County community of citizens and law enforcement officials. We actively facilitate neighborhood safety and security by providing an anonymous, safe way to report suspected crimes and by financially rewarding those tips that lead to an actual arrest. 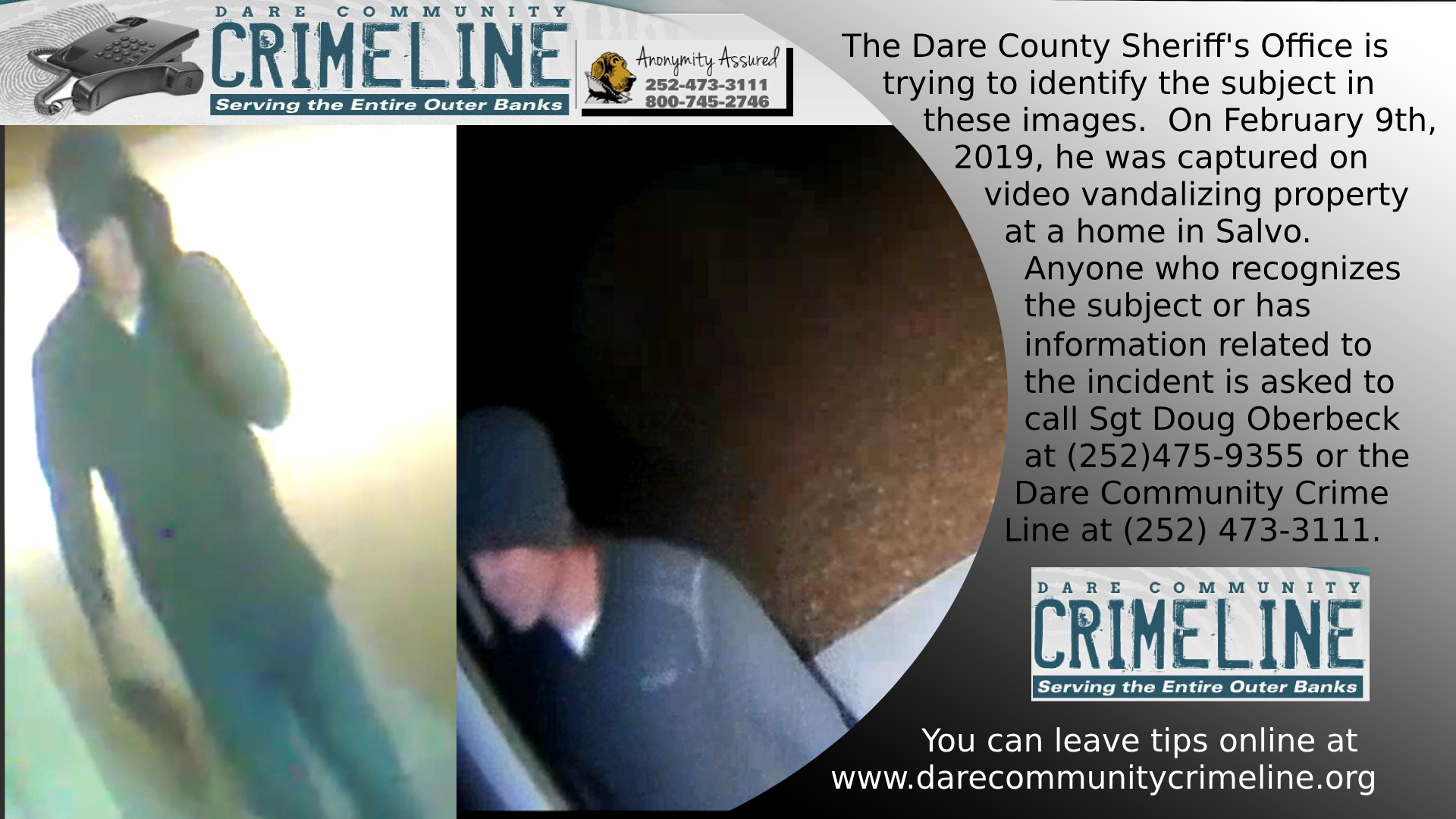 Vehicle Breaking and Entering: The Dare County Sheriff’s Office is asking for the communities help in identifying the two men in the video. They are the subject of an ongoing investigation into multiple car break ins in the Manteo area that are targeting the area between Etheridge Rd. and Burnside Dr. Any information that the citizens of Dare County can provide will be extremely useful. They can contact Inv. Harper at 252-475-9354, or the Dare County Crime Line.

Larceny: The Dare County Sheriff’s Office is trying to identify the person in this video. On April 7, 2018 she was seen taking a comforter from the Coastal Cottage Outfitter shop in Frisco without paying for it. She was seen getting into a silver Chevy Avalanche with possible Virginia registration. 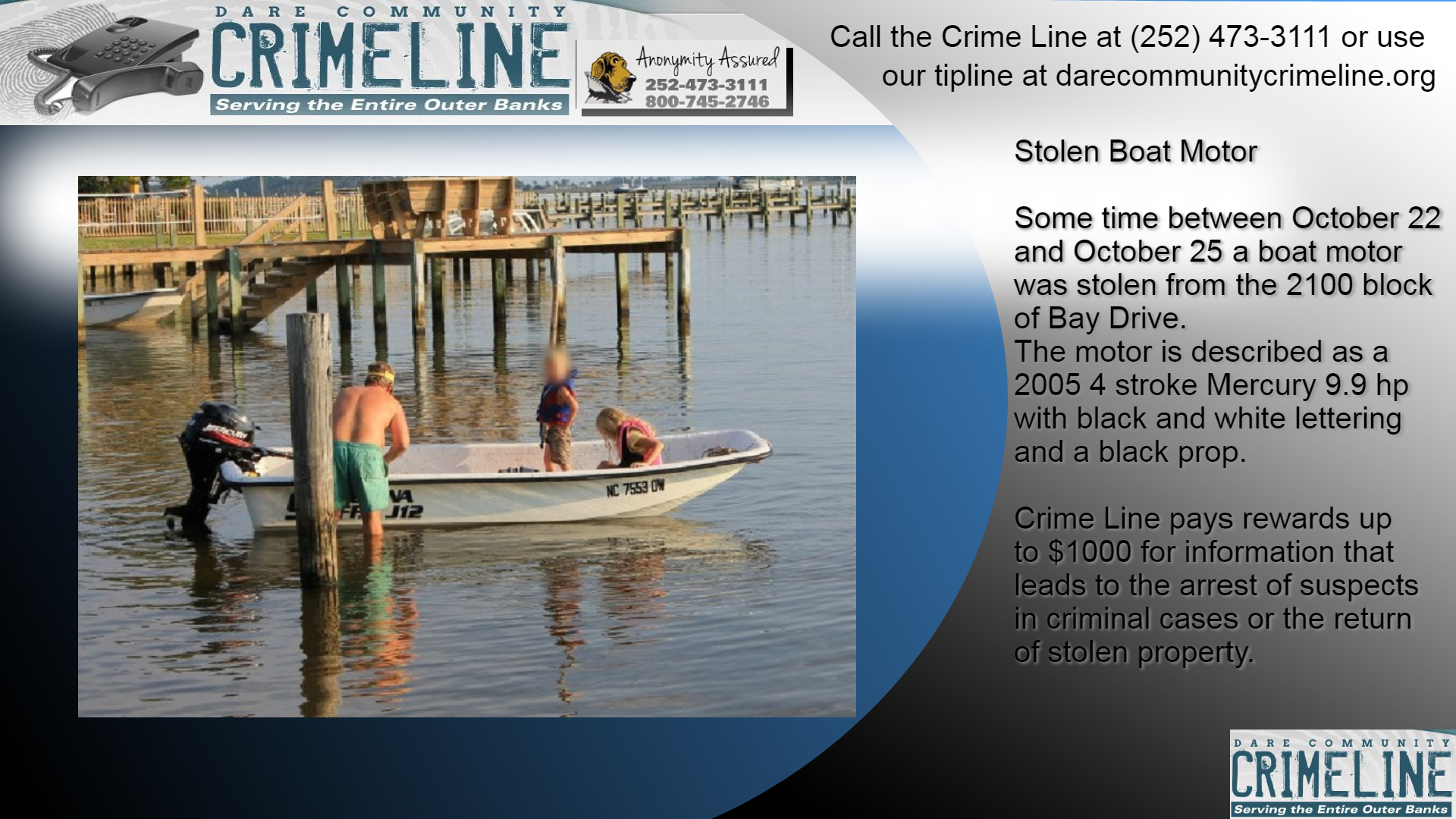 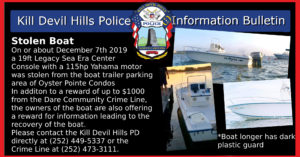 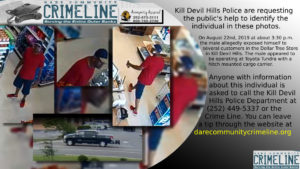 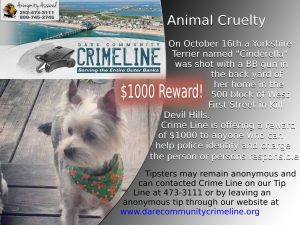 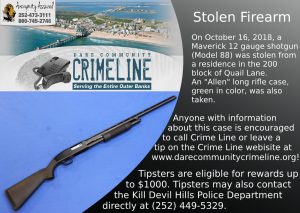 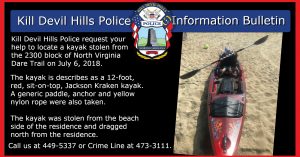 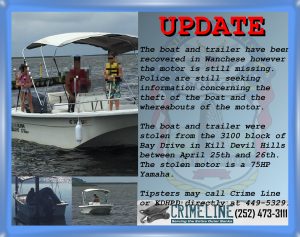 Boat Larceny: Kill Devil Hills Police are investigating the theft of a 17-foot Carolina Skiff Classic and Magic Tilt boat trailer from a residence in the 3100 block of Bay Drive. The boat and trailer were taken during the evening hours of April 25th.  The Carolina skiff had a 75 HP Yamaha motor and a white awning. The boat and trailer were recovered in Wanchese but the motor is still missing. Police are seeking information to identify suspects in the case.

Vehicle B&E and Tool Larceny: Kill Devil Hills Police are investigating the theft of construction tools from a work vehicle parked in the 1800 block of Creek Street. Over $1,000 in tools were taken during the night on April 9th including a Dewalt skill saw, Dewalt sawsall and Dewalt impact wrench. Case number 18410-02, contact Det. Jody Lewis.

A number of vehicles in the area of Ketch Lane and Landing Drive in Kill Devil Hills were broken into over the weekend of March 17th. The stolen items included money, wallets and a black Ruger LCP .380 pistol. (Stock photo of a similar weapon). 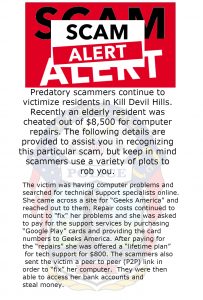 Predatory scammers continue to victimize residents in Kill Devil Hills. Recently an elderly resident was cheated out of $8,500 for computer repairs. The following details are provided to assist you in recognizing this particular scam but keep in mind scammers use a variety of plots to rob you.

The victim was having computer problems and searched for technical support specialists online. She came across a site for “Geeks America” and reached out to them. Repair costs continued to mount for her problems and she was asked to pay for the support services by purchasing “Google Play” cards and providing the card numbers to Geeks America. After paying for the “repairs” she was offered a “lifetime plan” for tech support for $800. The scammers also sent the victim a peer to peer (P2P) link in order to “fix” her computer. They were then able to access her bank accounts and steal more money.

This is not the first tech support scam reported to Kill Devil Hills PD and there have been others in Dare County with losses in the thousands of dollars. Legitimate online services will never ask for payment with Green Dot, Google Play or other prepaid cards and should provide you with an upfront cost that will not continue to fluctuate.

If you are a cashier at a local business and notice a customer returning on multiple occasions to buy prepaid cards, you might want to have a talk with them. If nothing else, you can always call the police to investigate a suspicious condition. Help look after each other and beat the scammers at their game. 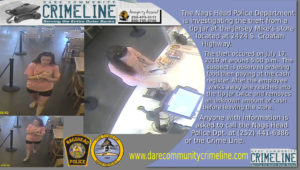 Larceny: Nags Head Police are investigating the theft of boat parts by three suspects operating a four door sedan with North Carolina tags. The suspects were reported entering boats stored at residence and removing batteries and possibly other items.

Breaking and Entering: On March 26, 2018 at 9:30 p.m. in the 2400 block of South Virginia Dare Trail, a white male in his 50’s, driving a black mid-size SUV, broke into a storage area under a home, stealing bicycles, fishing rods and reels,  leaf blower, and a lawn trimmer. If any information is known about this subject please contact Det. Mann with the Nags Head Police Department at 252-441-6386.

On April 4, 1991 at 10:00 AM Nags Head Officers were dispatched to the 8600 block of East Tides Drive in reference to a deceased infant in the trash can rack. When officers responded, the found the mummified body of an infant. An autopsy revealed the infant was Caucasian with blond hair. The infant was approximately 5-7 pounds at birth and 18-19 inches in length. The sex is unknown due to the condition of the body when it was discovered. The estimated age of the infant is less than 3 month. It is estimated the body was placed in the trash rack in February. Anyone with information concerning this case is strongly encouraged to reach out to the Nags Head Police Department directly at (252) 441-6386. Tips may be submitted through Crime Line as well.

Anyone with information about crimes in Nags Head should contact Crime Line or the Nags Head Police Department at (252) 441-6386.

At 5:30 a.m. this morning, staff at Cape Hatteras National Seashore (Seashore) found a dead loggerhead sea turtle (Caretta caretta) on the beach approximately 0.10 miles south of Ramp 49 in Frisco, NC. It is likely that the sea turtle died from a vehicle collision. Loggerheads are listed as threatened under the Endangered Species Act.

Early this morning, the female sea turtle came onto the beach to lay a nest in the sand. She had begun to lay eggs into a nest dug in the beach when it is believed, based on evidence found at the scene, that a motor vehicle struck and ran over the turtle. Observations suggest the time of the apparent collision was one or more hours prior to 5:30 a.m., during a time where the route was closed to off road vehicle use. Intact eggs were discovered near the dead loggerhead sea turtle and are thought to be viable.

The Seashore is actively investigating this incident. Specifically, the Seashore is seeking information regarding a vehicle driving on the beach at Ramps 49 or 48 in Frisco between 9:00 p.m. on May 24 and 5:30 a.m. today, May 25. Anyone with information that may help determine the circumstances and events that led to the death of this sea turtle are asked to contact the Dare County Community CrimeLine or the National Park Service’s Investigative Services Branch (ISB).

“At this time of year, ocean-facing off road vehicle ramps are closed between 9 p.m. and 6 a.m. for an important reason – to protect nesting sea turtles. It is very unfortunate that a vehicle appears to have disregarded the Seashore’s regulations which has resulted in this turtle death,” stated Superintendent David Hallac. 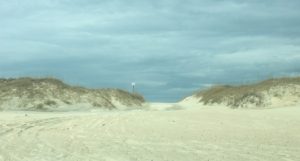 The reproduction bust of Orville Wright, which was recently stolen from Wright Brothers National Memorial, was found this afternoon on the beach in Kill Devil Hills, North Carolina.

National Park Service Rangers will continue investigating the theft of the bust and the damage to its granite mounting base. Homeowners and business owners in the area of Wright Brothers National Memorial and 909 S. Virginia Dare Trail are encouraged to review security camera footage and report any suspicious activity from the night of October 12th through the afternoon of October 15th. To report tips, contact the Dare County Community CrimeLine or the National Park Service’s Investigative Services Branch (ISB).

“While we are pleased that the bust of Orville Wright has been found, we are fully investigating this incident in order to determine who stole the bust and caused damage to its granite mounting base,” stated National Parks of Eastern North Carolina Superintendent David Hallac.

UPDATE: Orville has been found but the search for the perpetrators continues. If you have any information the numbers below are still good. 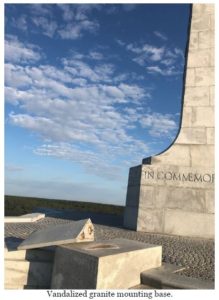 The copper reproduction bust of Orville Wright, located at the foot of the Wright Brothers Monument, was stolen, and the heavy granite base that the bust was mounted to was toppled over and damaged last evening or early this morning
National Park Service Rangers and local law enforcement officials are investigating this crime. If you have information that could help solve this case, please contact the Dare County Community CrimeLine or the National Park Service’s Investigative Services Branch (ISB).
National Park Service ISB Tip Line
• Call or text the ISB Tip Line at 888-653-0009
• Online at http://www.nps.gov/isb and click “Submit a Tip” 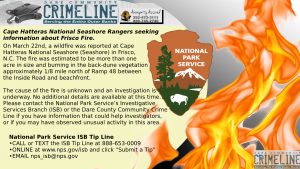 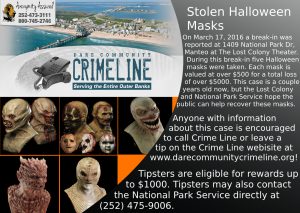 Cold Case-Hit and Run Fatality:  On July 18, 2003 at approximately 8:43 p.m. a vehicle travelling north on NC 345 struck a bicycle operated by Mr. Harry Niser, Sr. of Wanchese.  Mr. Niser was killed as a result of the collision.  The suspect vehicle fled the scene and is believed to be a dark colored, late 80’s passenger vehicle with damage to the right front quarter panel.  The Troopers need your help to solve this case.  If you have any information, call the Crime Line or the Dare County Highway Patrol at (252) 441-7341.